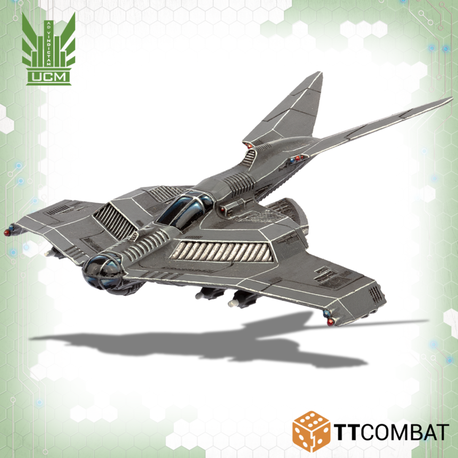 Dodane recenzje (0) dodaj opinię
Contains 1 multi-part resin miniature with parts to arm with either a Missile Cluster or Bunker Buster.

The Seraphim fills the role of heavy strike fighter and bomber in the UCM; a job that it does very well! It comes equipped with Heavenfire missiles, either able to target the most hardened battle tanks or used as a Flame attack to hit enemies in Garrisons (and set them on fire to boot). You can also bring a Bunker Buster to battle, offering a massive Devastator-4 to scenery, meaning each time it targets a scenery piece it does 4 damage! Alternatively trade demolition for a Missile Cluster which is equally good at targeting enemy infantry and vehicles. With high energy and ignoring all cover, no one will be safe!

Contains 1 multi-part resin miniature with parts to arm with either a Missile Cluster or Bunker Buster.

Resin miniatures supplied unpainted and unassembled. This kit will require cleaning and assembly, and could need some small holes filled.